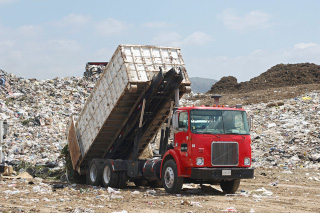 How Much Waste is Wasted in Landfills?

When people think of landfills, they often think of the desolate places in which all their trash and other thrown away items go to rot.  But have you ever stopped to think if everything in a landfill really belongs there?

How Much Organic Waste is Wasting Our Landfill Space?

We all know that organic waste naturally breaks down in an open-air environment, but in landfills it does not decompose as rapidly, and literally takes up too much space.

A 2012 Yale Research Team found that organic waste occupied the largest percentage what’s being dumped into landfills — at a rate of 21.4% per year! (The EPA’s estimate was higher at a rate of 34.5%).  Just to be clear, organic waste consists primarily of everyday items such as product packaging, animal and plant based materials, food scraps, newspapers, cardboard and other paper-based material, and 1 out of every 5 tons being thrown into landfills is organic material that doesn’t belong.

The Yale team calculated that in 2013, organic waste being sent to landfills rose to 294 million tons. With 316 million people in the U.S., that comes to 1,871 pounds per person.

Futhermore, a University of Southern Indiana research study supports the Yale findings with the following data:

But Why is Organic Waste in Landfills Problematic?

Landfill waste has a significant economic and environmental impact.  It costs more money to send waste to the landfill per year than it does to take the time to recycle it and consume less items that generate waste.  Environmentally, waste decomposes very slowly, which leaves the land useless for the time period in which a landfill is being utilized.

So how can we make a change?

There are several things we can do to decrease the amount of organic waste that is going straight to the landfills.  Here are a few suggestions to get started:

When we take the time to divide out what we are throwing away and recycling those items that can be reused, we actually drive economic growth and strengthen land development.

Composting is a great way to regenerate soil and nutrients within the land, creating an organic environment in which to grow produce and other items that require nutrient-rich soil.

Believe it or not, many of the clothes we have that we throw away end up in a landfill!  The more clothes we can donate to friends, family, or places like Goodwill, the less cloth-type waste we will send to landfills.  This means a quicker return for the use of that land, as clothes decompose very slowly.

In today’s culture, people tend to “eat and run”. Groceries and Restaurants are notorious for throwing out edible food. As a result, we often throw away the food unconsumed, which then ends up in the landfill to decompose.  We would be smarter to take the food we choose not to eat and either consume leftovers, or choose to donate uneaten food to charities whose people struggle to feed themselves.

Overall, landfills retain a considerable amount of waste that costs Americans money, time, and long-term resources.  It is important that we consider all that might go to a landfill, and make adjustments in our daily life to accommodate our desire to allow the earth to continue to grow and develop.